Witches in Your Family Tree

This is the time of year for ghosts, goblins, and other such superstitions. However, perhaps it is also a time to pause and reflect on the horrors of those who suffered in Salem, Massachusetts, in 1692. The witches of Salem and nearby towns probably have hundreds of thousands of present-day descendants. If you have ancestry from early Essex County, Massachusetts, you have an excellent chance of finding a connection to the Salem Witch Trials of 1692.

Circa 1692, The trial of George Jacobs for witchcraft at the Essex Institute in Salem, Massachusetts. (Photo by MPI/Getty Images)

Salem, Massachusetts, and the surrounding towns in Essex County were amongst the first settled in this country. Most of the towns were established prior to 1640. By the time of the witchcraft trials of 1692, a complete legal system of courts and clerks was well established. Records were written, and many of them have been preserved. Even if your ancestors are not among those accused, it is quite possible that you can find them mentioned as witnesses, those who gave depositions, or perhaps even those who served on a jury.

The reasons for the witchcraft hysteria have been debated for centuries. One modern theory involves ergot of rye, a plant disease that is caused by a fungus, Claviceps purpurea. Anyone who eats bread made with ergot-infected rye can exhibit symptoms of muscle spasms, tremors, and writhing. This may be accompanied by hallucinations. Such afflictions can indicate poisoning by ergot, or “ergotism.” Modern science has documented likely cases of ergotism in the Dark Ages, but the cause was only proposed in 1670 by a French physician, and outbreaks in the 20th century have shed much more light on both symptoms and their cause.

We know much about the lives of the Puritan inhabitants of Essex County in 1692. We know that they were mostly illiterate, and almost all citizens were intensely religious. In their simple lives, they were afraid of the darkness and of many things in this world that they did not understand. They were convinced that the Devil walked amongst them every night and that he had many disciples. This fear was reinforced by the sermons delivered by Reverend Samuel Parris most every Sunday. If the citizens of Salem and nearby towns did exhibit muscle spasms, tremors, writhing and hallucinations, one cannot be surprised that their neighbors felt the victims were indeed possessed by the Devil himself.

Ergot of Rye occurs in hot, humid weather. Warm, rainy springs and summers promote heavier than usual fungus infestation of rye. The pattern of the weather in 1691 and 1692 is apparent from brief comments in the diary of Samuel Sewall of Salem. Early rains and warm weather in the spring progressed to a hot and stormy summer in 1691, perfect conditions for creating hallucinogenic bread in the fall and winter of 1691, well into the spring and possibly very early summer of 1692, before the new crop of rye was harvested. Sewall recorded that there was a drought in 1692; thus, no contamination of the grain would be expected that year.

You can read a detailed explanation of ergotism and the possibilities of its
occurrence in Salem in an article by Linnda R. Caporael at http://www.physics.smu.edu/scalise/P3333sp08/Ulcers/ergotism.html.  There is no proof available today that ergot of rye was the cause of the Salem Witch Trials. It does, however, provide an intriguing possibility.

The whole series of episodes began in December 1691 and into January, a time when the people of Salem would be eating bread made from the summer’s rye harvest, rye that had time to become infected with ergot. Two girls – Betty Parris, daughter of minister Samuel Parris, and his niece Abigail Williams – began exhibiting strange behavior. Soon a number of other young girls were also exhibiting the same symptoms. Several historians have suggested that perhaps the girls were simply playing childish games.

Physicians called in to examine the girls could find no explanation for their illness. In February one doctor suggested the girls might be bewitched. A neighbor had Parris’s Barbados slave, Tituba, concoct a “witch cake” in order to determine if witchcraft was present. Shortly thereafter, the girls made an accusation of witchcraft against Tituba and two elderly women of general ill repute in Salem Village, Sarah Good and Sarah Osborn. The three women were taken into custody on 29 February 1692. The afflictions of the girls did not cease, and in March they accused Martha Corey and Rebecca Nurse. Both of these women were well respected in the village and were covenanting members of the church. Further accusations by the children followed. By June the hunt for “witches” expanded beyond Salem to Andover, Ipswich, Gloucester, and other nearby towns.

The accused witches were tried and most of them found guilty, using logic that sounds silly today. However, to the ill-educated citizens of Salem, these were “facts.” Contrary to some stories, none of the witches of Salem were ever burned at the stake. With one exception, all were hanged at a public gallows. The one exception is poor Giles Cory, a church-going member of the community, who was pressed to death with large stones. 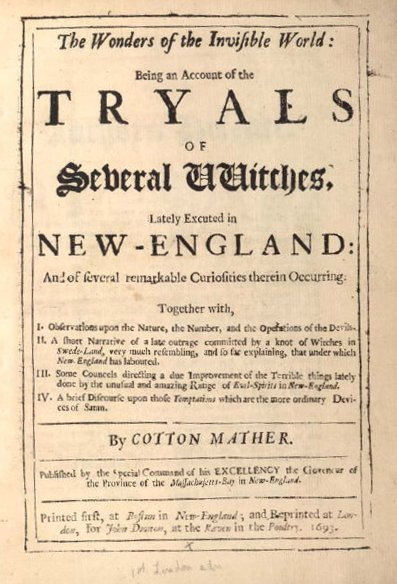 The last hangings occurred in September of 1692, and by May of 1693 all accused witches still imprisoned were released. It is interesting to note that the reported drought of 1692 would have meant the elimination of ergot of rye by September, the time of the last execution.

The final count of witchcraft victims was twenty executed and more than a hundred imprisoned. (One died in prison.) In addition, many others fled into exile or hiding places, their homes were broken up, their estates were ruined, and their families were left in desolation. All of this was caused by the leaders in the communities: the magistrates and ministers.

Finding your ancestors’ roles during the Salem Witch Trials may not be terribly difficult. Many of the original trial documents are now both in print and online. You might start at some of these:

The Salem Witch Trials of 1692, A Brief Introduction: http://www.salemweb.com/guide/witches.shtml.

The Salem Witchcraft Trials at: http://www.publicbookshelf.com/public_html/The_Great_Republic_By_the_Master_Historians_Vol_I/salemwitc_dh.html.

Salem Witchcraft: the Events and Causes of the Salem Witch Trials by Tim Sutter: https://easymagictricks21.blogspot.com/2016/04/salem-witchcraft-events-and-causes-of.html.

Salem, Massachusetts, was not the only scene of witchcraft trials in North America. However, it is the one whose history is permanently etched in our memories. You may have ancestors who were eyewitnesses to one of the saddest times in American history.

That is true but witches exist and always have innocent people lost there lives over it. Jennifer Mulvey

My 8th great grandmother, Mary Clements Osgood of Andover aged 55, was accused, identified by the “touch test”, examined, jailed for three months and tried in Boston for witchcraft. She was found not guilty. Her husband, John, counseled her before her first examination in Salem Village to plead guilty. His analysis of the scare revealed those who admitted to witchcraft escaped hanging so that clergy could save their souls.

Two of my ancestors were accused. Rebecca Nurse was acquitted and then tried again and hanged. Mary Bassett Derich was arrested and jailed, but I have not yet confirmed that she was convicted. Her son John was one of the teen-age witnesses.

George Jacobs Sr., the only male hanged for being a witch, was my 8th great-grandfather. I’m thrilled to see this etching about his trial. Very informative article and love the theory.

Oops! I just realized Geo. Jacobs Sr. Was NOT the only male hanged.

Our family never knew! The story of Susannah
North Martin was lost over time to some of her descents. Her 14th great granddaughter.

While the witches of Salem receive a lot of publicity many people do not know that there were witch trials in Connecticut 30 years before. My 9th great grandmother was accused, tried, and executed as a witch in the Connecticut trials.

I forget to mention my 9th Great Grandmother was Mary Barnes, wife of Thomas. https://digitalfarmington.org/digital-farmington-project/mary-barnes-last-witch-hanged-in-connecticut/

In your research did you find that mostly women, and girls, ate the bread but not the men. You mention in your post one man and a second in the comments. Just curious.

—> In your research did you find that mostly women, and girls, ate the bread but not the men.

I suspect that all village residents ate the bread. After all, bread was a staple in the diets of most everyone in those days. However, I am not aware of any reliable list of who did and who did not eat the bread.

The closest thing I can think of is a list of people who apparently exhibited behavior strange enough to appear to possibly be bewitched. As such, those exhibiting strange behavior probably were all the ones who went to trial. (I am sure there must be some exceptions but, again, I am unaware of any such list.)

Most of those who went to trial were women. Wikipedia has a complete list of everyone accused, male and female alike, at: https://en.wikipedia.org/wiki/List_of_people_of_the_Salem_witch_trials

This piece misses a major reason for the witch trials which is brilliantly presented in the audio book “Scholars, Witches, and Other Freedom Fighters” by Gloria Steinem. This is a lecture she gave in Salem and is a must listen!