The Story Behind the German Jewish War Hero Honored on Both Sides of the Atlantic, Decades Apart

Today marks the 75th anniversary of the liberation of Auschwitz. A beautiful story is featured today on CNN, made possible thanks to the dedicated efforts of the MyHeritage Research Team. 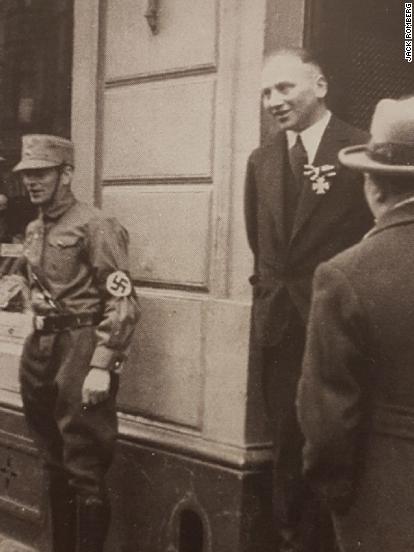 According to the MyHeritage Research Team:

“An iconic 1933 photo of Jewish shopkeeper Richard Stern standing defiantly outside his shop in Cologne, Germany, sparked the interest of our Research team, who noticed the Iron Cross on his lapel as a Nazi soldier [Correction: He is a brown shirt: a member of Hitler’s Nazi party] stands guard a few feet away. Using MyHeritage family trees and SuperSearch™, our researchers traced Stern’s incredible personal story from that day in Cologne and across the Atlantic Ocean. What they revealed was an inspiring story of hope and determination starring a real-life hero.”

You can read the article by CNN reporter Lianne Kolirin at: https://edition.cnn.com/2020/01/27/europe/richard-stern-photo-grm-scli-intl/index.html.

This is an amazing story which once again illustrates how totally screwed up the Nazi thinking was….I can not imagine how the people could buy into such thinking.

This is an amazing story. He was such an honorable man! Oftentimes, people get upset when they come across a family tree that has people gathered that are not direct, but may be a “side shoot” of one’s tree. And no, its not because I have to “gather” many names! It’s stories that I find of distant relatives when I go digging, that captivate me and give me more history into the lives of my ancestors. Of course, I am not related to this man….but his story is great. Thanks!