A Message from MyHeritage

MyHeritage (the sponsor of this newsletter) has refreshed all the data for the Theory of Family Relativity™. This much-anticipated update can provide you with new and improved theories that explain how you and your DNA Matches may be related, give you answers about relationships that have baffled you, and offer new insights about your ancestors and family relationships.

If you are not familiar with MyHeritage’s Theory of Family Relativity™, the best description I have found is that it “leverages all the data available on MyHeritage, such as family trees and historical records, to provide you with plausible theories as to how you may be related to a given DNA Match.” The results are exactly what they are claimed to be: THEORIES, not proven facts. In short, the MyHeritage computers have compared millions of DNA records against your DNA sample and said, “These are possibilities, you might want to check these to verify whether or not they are your relatives.” These possibilities then need to be reviewed by you to determine if the theory is really a fact or not.

END_OF_DOCUMENT_TOKEN_TO_BE_REPLACED

Using a new feature available on MyHeritage, I just looked at my high school yearbook and found that adding color to my picture did not improve my looks! However, the young lady’s picture next to mine looks even better than what I remembered.

I was also surprised to find five other young men who have the same name as mine, all graduating the same year but from different high schools all over the U.S.

You probably will find somewhat similar results if you search for your on high school yearbook or for those of your friends and relatives.

END_OF_DOCUMENT_TOKEN_TO_BE_REPLACED

As 2019 comes to a close, the MyHeritage blog has a new article that summarizes some of the company’s achievements and milestones over the past year. See:  https://blog.myheritage.com/2019/12/wrapping-up-a-fantastic-2019/

Note: MyHeritage is the sponsor of this newsletter.

Dr. Phil Learns More About His Family’s Roots with MyHeritage

From the MyHeritage Blog:

We just visited the set of television personality Dr. Phil to share with him unknown information about his family’s past. Dr. Phil was amazed and fascinated with what we were able to uncover about his family history, including never-before-seen photos and records.

Dr. Phil began his journey with MyHeritage roughly a year ago when he took a MyHeritage DNA test and discovered previously unknown details about his family history. We even presented his wife, Robin McGraw, with some amazing family history information. Among other things, she learned that working in the beauty industry runs in her family.

END_OF_DOCUMENT_TOKEN_TO_BE_REPLACED

From the MyHeritage Blog (MyHeritage is the sponsor of this newsletter):

We are delighted to announce a major addition to the MyHeritage DNA Health+Ancestry test — 9 new health reports that provide important insights to our users.

In May 2019, we launched the MyHeritage Health test, which offers new dimensions of genetic insight to enrich your life, enlighten you about your health, and help you make informed lifestyle choices. At launch, we promised to continue expanding the scope of the health reports, and the addition of these 9 new reports is the first of many updates that we intend to release in the future.

The 9 new reports include a polygenic risk score for evaluating genetic risk for high blood pressure, 3 reports that estimate genetic risk for developing a disease, and 5 carrier status reports that indicate if an individual is a carrier of a disease that may be passed from a couple to their children if both partners are carriers for the same condition.

END_OF_DOCUMENT_TOKEN_TO_BE_REPLACED

The following announcement was written by MyHeritage, the sponsor of this newsletter:

I’m pleased to share that today we added 9 new reports to the MyHeritage Health test! The new reports include a polygenic risk score (PRS) for high blood pressure, genetic risk reports for PALB2-associated breast cancer and susceptibility to malignant hyperthermia, a report on susceptibility to HIV-1 infection, and 5 carrier status reports. 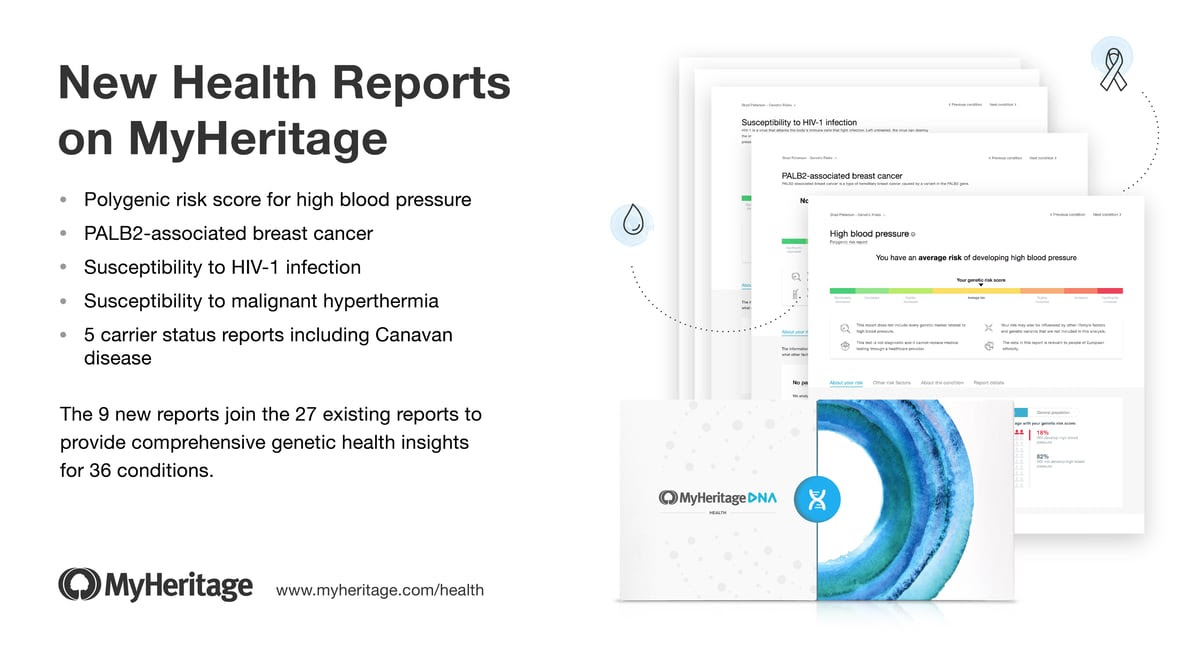 END_OF_DOCUMENT_TOKEN_TO_BE_REPLACED

Here is a breakdown of the new records:

END_OF_DOCUMENT_TOKEN_TO_BE_REPLACED

(Full Disclosure: MyHeritage is the sponsor of this newsletter.)

Available in English, German, Dutch, French, Swedish, and Norwegian, MyHeritage Education offers a wealth of material to help you learn about every facet of MyHeritage. The content includes articles, how-to videos, and webinars covering a wide variety of topics, as well as plenty of tips for everyone, from beginner family history enthusiasts to seasoned genealogists.

I’m pleased to share our first monthly update from MyHeritage Education! I hope that you’ll find it useful and enjoy receiving updates on all of the new material we publish each month.

END_OF_DOCUMENT_TOKEN_TO_BE_REPLACED

This may sound anti-climatic, but Day #3 of the MyHeritage LIVE 2019 was almost identical to Day #2. The only major difference was obvious: there were different presentations made by different speakers. Actually, I consider that to be great news! Indeed, it was exactly what I had hoped would happen.

Every attendee I talked with expressed delight in attending the conference and everyone seemed to smile all day long, except maybe for me. Due to self-inflicted strolls around the city, my feet hurt!

I won’t republish the names of all the speakers or the names of their presentations as that information is already available online at https://live2019.myheritage.com/. Click on that link for the details.

This year’s numbers include:

END_OF_DOCUMENT_TOKEN_TO_BE_REPLACED

Today (Saturday) was the second day of the 3-day MyHeritage LIVE 2019 conference, held in Amsterdam, the Netherlands. (You can read my report of Day #1 at https://tinyurl.com/eogn190907.) Today also was the first full day, filled with presentations. The day started with MyHeritage Founder and CEO Gilad Japhet, welcoming everyone and making several announcements about new products, services, and even two acquisitions. More on that in a minute…

Luckily for me, each attendee had a name badge that included their country of residence. I noticed attendees from the Netherlands, USA, Sweden, Norway, Germany, Costa Rica, South Africa, Brazil, New Zealand, and Australia, and I probably did not see everyone. I suspect there were other countries represented as well. All the conference presentations were delivered in English, but it was fun listening to conversations in the hallways and at lunch being conducted in many different languages.

Not only was the attendance good in Amsterdam but the presentations were also visible via live streaming on the Internet, so I suspect many more countries were represented online.

The day continued with three simultaneous tracks: (1.) genealogy, (2.) DNA, and (3.) hands-on workshops. Finally, the day ended this evening with one of MyHeritage’s signature parties. I believe a great time was had by all. At least, I had a great time. I must have enjoyed it; I am so tired tonight that I can hardly move! That’s a sign of a successful conference.

END_OF_DOCUMENT_TOKEN_TO_BE_REPLACED

The MyHeritage LIVE 2019 conference opened today with a good-sized crowd in Amsterdam, the Netherlands. I was surprised to see so many Canadians, Irish, Swedes, Norwegians, French, and people of other nationalities in attendance. In fact, one person came all the way from Australia just for the event. (He did admit he also is taking a few days for a holiday before returning home.) I noticed people from all over the European continent as well as from England, Scotland, and Wales. I was also pleasantly surprised to see many Americans in the crowd. I suspect there were more nationalities present, but I didn’t get to meet everyone.

The conference started on Friday afternoon, September 6. I was in the crowd and snapped a few photographs that you will see later in this article.

Friday may have been the first day of the conference, but it was very laid-back and casual. No presentations were made except for the world premier of a new documentary film, described below.

Conference registration lasted all afternoon, and I was impressed by all the people wandering around and wearing MyHeritage-issued name tags.

END_OF_DOCUMENT_TOKEN_TO_BE_REPLACED

Attention European readers of this newsletter: You might want to attend the party on board the MyHeritage Eurovision Bus! According to an article in TVToday:

Fans are getting ready for Eurovision 2019, while music lovers spend the night in the pub.

MyHeritage’s Eurovision Bus has begun its tour of Europe, attending major pre-parties, hosting celebs and give Eurovision fans chances to win Eurovision tickets. The bus began its journey on April 6th in Amsterdam heading yesterday to Hamburg. It will be spending today in Copenhagen, however Brits wanting to get on board will need to head to London on April 14th.

END_OF_DOCUMENT_TOKEN_TO_BE_REPLACED

The planning for MyHeritage’s International User Conference is well underway. This should be a top-notch conference and, for most of us, it is a chance to visit a great tourist destination: the city of Oslo. The conference web site may be found at: https://live2018.myheritage.com.

A jam-packed schedule will include lectures from top MyHeritage staff and world-renowned genealogists and DNA experts. There will be three class tracks:

END_OF_DOCUMENT_TOKEN_TO_BE_REPLACED

MyHeritage is Featured on a Prime Time Television News Program

MyHeritage, the sponsors of this newsletter, received some excellent publicity recently in a television segment on an Israeli prime time news show, watched by over 25% of Israel’s population. It featured an interview with MyHeritage Founder and CEO, Gilad Japhet, and showcased MyHeritage as a company that not only does well as a business, but also does good in the world.

The segment highlights some of MyHeritage’s pro bono work, including helping to discover heirs for unclaimed assets confiscated during World War II, returning looted art to its rightful owners and a global crowdsourcing project to digitally preserve the world’s cemeteries with BillionGraves.